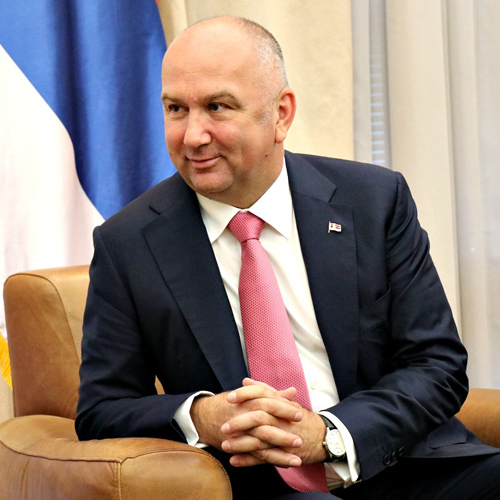 Minister without portfolio responsible for innovation and technological development

He has published eight books and more than 120 scientific papers in various fields, including economics, regional development, management, economic relations between Serbia and Russia, as well as the condition and prospects of economic development of the southern Serbian province of Kosovo-Metohija.

ABS Elektro, a company founded by Popovic 25 years ago, started as a company for the sale and production of aluminium electrical equipment and automation systems for factories. Today, this corporation has 3,000 employees in eight companies and scientific institutes in Russia. The corporation is the leading supplier of electrical equipment for energy, hydroelectric and hydronuclear plants in Russia and the region.

Popovic started his civil service career in 2005 as head of the Economic Team for Kosovo-Metohija and deputy chairman of the Coordinating Body of the Serbian government for Presevo, Bujanovac and Medvedja.

He was a member of parliament from 2008 to 2012 as a deputy of the Democratic Party of Serbia, and also Deputy Speaker of the National Assembly of the Republic of Serbia in the period from 2012 to 2014. He led a parliamentary friendship group with the Russian Federation.

He has been nominated for the position at which he is now in the Serbian government by being a successful businessman who has achieved internationally recognised results in the field of development and application of innovations in industry. Popovic withdrew from his business ventures to engage in public work in Serbia.

Popovic applies his unique business experience to improve the entrepreneurial environment and thus take Serbia towards a promising and innovative technological future.

He hopes to turn Serbia into a regional as well as a global technology leader through his initiatives to reduce bureaucracy, increase the budget for Serbian entrepreneurs, and open the space and chances for investment. He is a great advocate of Serbian technology and innovation, and he is continually promoting it to foreign governments, investors and global technology companies.

He is the holder of several decorations, the most important of which are: The Order of Saint Sava of the second degree for the restoration and strengthening of the faith and church in Serbia, awarded by His Holiness Patriarch of Serbia, the Order of Humanity of the State Union of Serbia-Montenegro for exceptional contributions to helping the Serbian people in Kosovo-Metohija, the Friendship Order for a special contribution to the development of economic and social ties between Serbia and Russia, awarded by the President of the Russian Federation.

In addition to serving as minister, Popovic is a great fan of the Serbian national football team and the Partizan Football Club and he attends their matches whenever possible. He is a passionate skier and recreational mountaineer who enjoys skiing and hiking in Serbia and other European countries.

He is President of the Saint Alexander Nevsky Foundation from Belgrade, which is responsible for the reconstruction of the memorial complex of the Russian Necropolis at the New Cemetery in Belgrade.

He is President of the Honorary Council of the Serbian-Russian Friendship Association.

He is a member of the Honorary Council of the International Fund for the Unity of Orthodox Peoples, chaired by the Patriarch of the Russian Orthodox Church.

He is Honorary President of the Immortal Regiment Foundation from Belgrade.

He founded the Serbian People’s Party (SNP) in 2014. As SNP President, he conducts a strong national policy of preserving territorial integrity and strives to build an economically developed, legal, prosperous and socially responsible Serbia. The SNP currently has three MPs in the National Assembly of the Republic of Serbia.