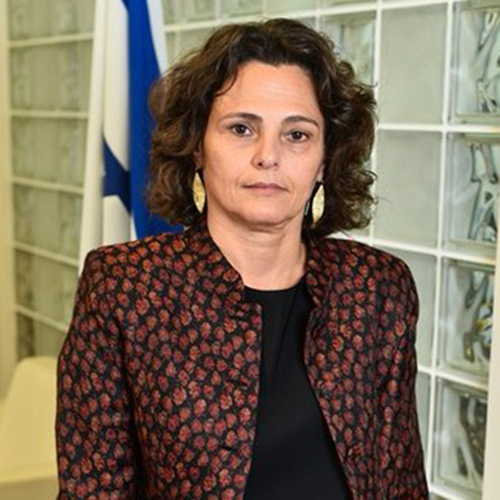 Dr. Alona Fisher-Kamm is a career diplomat with more than 25 years of experience in the Ministry of Foreign Affairs in Jerusalem. Her first post was in Buenos Aires from 1992 to 1995 in the Culture, Media and Public Diplomacy Department. She has also served as the First Secretary in the Latin American Department from 1995 to 1998 as well as the Media Adviser and Spokesperson in the Embassy of Israel to Paris from 1998 to 2002. From 2002 to 2004 Mrs. Fisher-Kamm was Deputy Director in the Multilateral Peace Talks Department and later the Deputy Chief of Mission in Madrid from 2004 to 2008. From 2009 to 2016 she was in charge of Training Bureau at the Ministry in Jerusalem preparing young Israeli diplomats for their future missions abroad.

She was also a Senior Fellow at the Richard and Rhoda Goldman Fund in the Hartog School at the Tel Aviv University conducting a research on innovation in the Public Sector from 2014 to 2015. Prior to that, Mrs. Fisher-Kamm was a fellow at the Forum for Liberal Nationalism in the Menachem Begin Heritage Center in Jerusalem from 2013 to 2014.